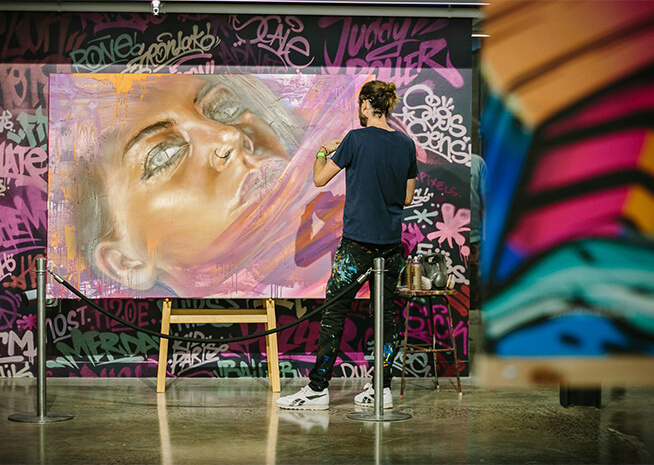 Last May, LCI Melbourne launched the Juddy Roller exhibition, which celebrated the cast of colourful characters who have produced artwork for this award-winning street art network.

Australia, and Melbourne in particular, boast one of the world’s most vibrant street art scenes. Juddy Roller is the team behind some of Australia’s best-known street art initiatives, from the Silo Art Trail in rural Victoria to Melbourne’s first official street art precinct.

The exhibition was commissioned especially for LCI Melbourne’s street art-themed inauguration event. The public could also view new artworks by street artists on the campus walls.

LCI Melbourne and Juddy Roller’s auction was launched at the LCI Melbourne building inauguration. The celebrated artist Adnate did a live painting on site, which was subsequently auctioned off.

Adnate is a young but well-established Australian street artist with an instantly recognizable style. The eyes of his characters are filled with emotion, and he specializes in painting Aboriginal people and female portraits.

Proceeds raised from the sale of Adnate’s artwork went towards the LCI Education Foundation, which is committed to giving back to developing countries by focusing on children’s literacy, specifically where the LCI Education network is present.

LCI Melbourne is a higher education institute uniquely specializing in the design arts. As part of the LCI Education network, students are connected to 22 partner campuses around the world and are empowered by access to international trends, industries, experts and experiences.